This post is part of a travel recollection from Kailash Mansarovar Yatra 2018 via Lipulekh. For a list of posts in their sequence please refer to the following link:

We started early from Kalapani for the next stop of Nabidhang, which was the last camp before we crossed Lipulekh into China (Tibet Autonomous Region ). We started trekking the 10 odd KMs that was to be traversed for the day. Early morning rains had made the weather chilly and the surrounding hills looked dreamy wrapped up in clouds.

I had lost my walking stick the previous day. Actually, I was basking the sun on the fields adjacent to the Kali Temple at Kalapani and remembered keeping the walking stick beside me. However, I could not detect it when I got up to leave. At first I thought maybe someone would have mistakenly picked my walking stick while leaving and I asked around the entire group during lunch that day to check if anyone had picked up the extra walking stick and requested to give it back to me. No one responded.

Walking these roads in this terrain without the help of a walking stick seemed very difficult. There was, however a friendly gentleman who worked at the KMVN camp at Kalapani. He gave me the walking stick that he used and asked me to give it back when I come back to India post completion of the Yatra. A rare encounter of generosity and kindness 🙂 I  kept my promise and while returning, gave it back the gentleman with thanks.

Later on, I found one of the yatris walking with two walking sticks and instantly recognised mine as the second one. It seemed that he knew too and walked past me in rather hastily. Sad. 😦

As I crossed the ITBP checkpost at Kalapani, one of the jawans on duty saw my name. He was from West Bengal. He gave me a glass of juice to give me some energy and asked me to be as slow as possible, take my time and take help wherever required. His encouragement and useful tips were accepted with gratitude as we moved forward.

We moved onward gaining height as we proceeded. As with previous day, I felt the thin air and was compelled to stop, even to take help of मोती, my calm white horse in more than one occasions.

A highlight of the journey came when I could distinctly identify the OM pattern just before entering Nabidhang. People say that the OM Parvat is either not easily visible, or is visible during a very brief period of time earlier during the day. It was also a dream, to see it with my own eyes, to verify with my human senses, whether it actually looks like how people describe it.

Firsthand experience tells, it actually does. 🙂

But we reached Nabidhang well before noon. We were provided an igloo this time.

We had lunch and took a short walk around the camp. Weather was overcast and it rained a bit, just before sunset, the sun came up to reveal the beauty of the high mountains.

We prepared for the next day. This day is both crucial and one of the toughest due to the timing and nature of travel required. Lipulekh (around 17060 ft) is a high altitude pass between India, Nepal and China. One needs to cross Lipulekh in order to proceed for the next leg of the journey within China (TAR).

The pass is most accessible during early morning hours, mostly before 9 AM, post which weather deteriorates. It takes around 3 hours of rigorous climbing to reach Lipulekh from Nabidhang. The passage of the people is monitored by both Chinese and Indian authorities. The previous batch returns from China and the next batch of pilgrims go in there. Hence at times there is a long wait time for the yatris on the Indian side for crossing the border.

We were scheduled to start at 1:30 AM at night from Nabidhang in order to reach Lipulekh on time. Hence we called it a day around 7 PM and woke by 12 AM. Post having a glass of milk, we proceeded towards the pass. The group travelled the pitch dark roads in the chilly, rainy weather. I was thinking about how tough it might have been for the pony and porters. Some of them did not even have a flash light to find their way, but that did not stop them from finding their way correctly.

My pony handler kept warning me not to fall asleep. 😀 How was I expected to sleep on horseback ? 😛 I am not exactly a Mongolian nomad yet, you know? Though, I do wish to be! 😉

As the sky started to light up, we reached the base of the pass. From here, we climbed an a relatively dangerous, narrow path to reach the top of the pass. Once there, we waited for around 2 hours in middle of the cold wind and freezing temperature. One of the yatris collapsed suddenly but thanks to the immediate action by the two ITBP doctors and some very helpful yatris, he was attended to and felt better after some time.

Finally, there was a news of the batch from China arriving and we could see some people coming up the slender passage that connects the pass to the platform underneath on the Chinese side where buses stand. They were the first batch of Kailash Mansarovar Yatra 2018. The people coming back cheered us and pleasantries were exchanged. We did not know each other but they gave us oxygen cylinders that they had brought and hugged and informed us that everything on the other side was fine! Before they went, they had also arranged for some refreshments that were kept for us in the busses that came to pick us up. 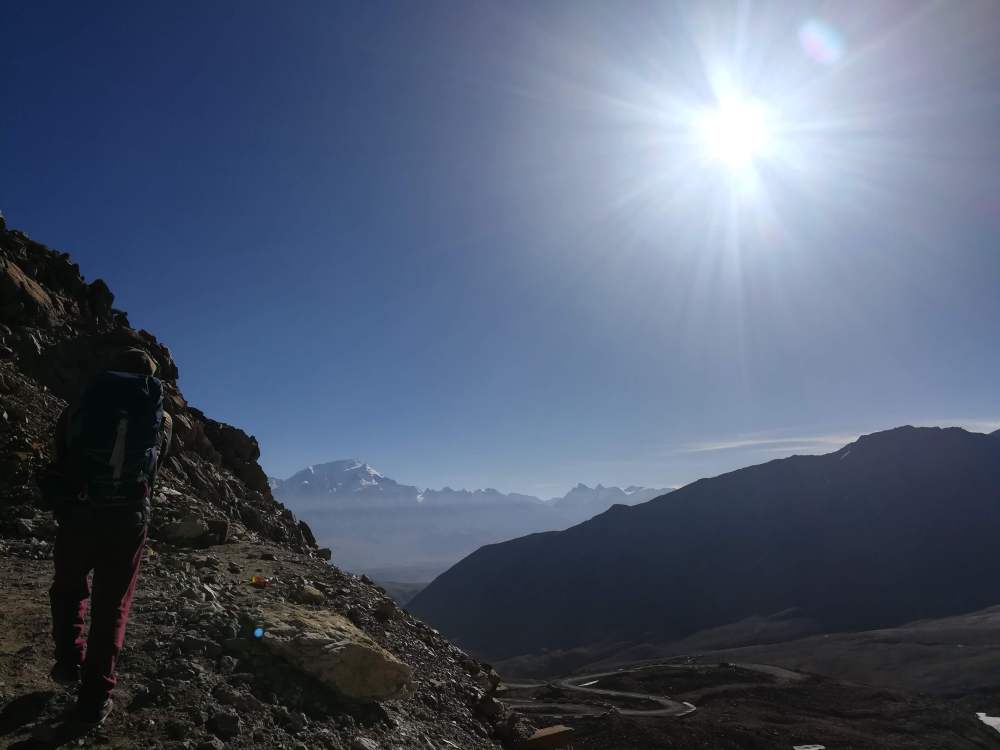 Sadly, there was a gentleman who was taken up on a stretcher by four individuals. We were told that he fell down on his way to CharanSparsh and later, we were informed while our return journey in Gunji that he could not survive the crash. 😦

We came down a path of around 300 meters to reach the platform where two buses stood to take us to Taklakot. We also met our guide on the Chinese side, Suraj and his crew here. We produced our passports and were checked before boarding the bus. The buses took us through some well made roads. The times of viewing the trans Himalayan regions had started.

The buses took us through the beautiful and magnificent landscapes to the trading town of Taklakot. We were taken for immigration and customs check first. These formalities took quite a while and most of us felt a bit uneasy due to the combined effect of being on the road since night, the excruciating experience of crossing Lipulekh and… lack of toilet facilities for so long.. 😀 This situation was killing most of the people in the group, especially the ladies. Luckily a toilet facility was found nearby to relieve the people of that issue. During the long wait time, the refreshments kept by the previous batch came to our rescue.

However, we were taken to our hotel after the formalities and provided somewhat comfortable rooms. Post freshening up a little, we had lunch and went out for a walk around the town.

We started walking out of the town , perhaps to an area that did not have that many foreigner foot falls. A lot of the locals seemed to be surprised. We walked some more to find a village at a distance. Also we saw some ruins at the top of a hill beyond the Karnali river.

Those were beautiful times filled with laughter, talks of life, love and beyond. The session had everything else except the usual thoughts of survival, Every other discussion except the mundane. Ah, that evening was divine! 🙂

The town of Taklakot, besides finding us excited, also made us jumble up the sense of time and date. Chinese standard time is 2.5 hours ahead of IST. Also, the sun worked overtime here, shining till well beyond 10 PM. 😀

We were an excited lot, going to bed by 9 PM, while the sun was still shining.

We stayed for a day at Taklakot, that was spent by many rounds of walks around the town, basking the sun in the courtyard of the hotel among talks of what to expect during the next few days.

Next stop: Darchen and parikrama (Kora) of Kailash…