This post is part of a travel recollection from Kailash Mansarovar Yatra 2018 via Lipulekh. For a list of posts in their sequence please refer to the following link:

The second day of the Kailash Parikrama is considered the most crucial. The days journey takes you through the highest point of the journey, Dolma La, situated more than 18600 ft above sea level. This day is also the toughest of the three days of the kora, covering more than 20 KM in a single day. The Dolma la is at a distance of around 6 KM from Deraphuk. We crossed a small bridge and started our ascend.

The surrounding were very cold with some of the hills covered with ice. Today I rode the pony for the longest duration. 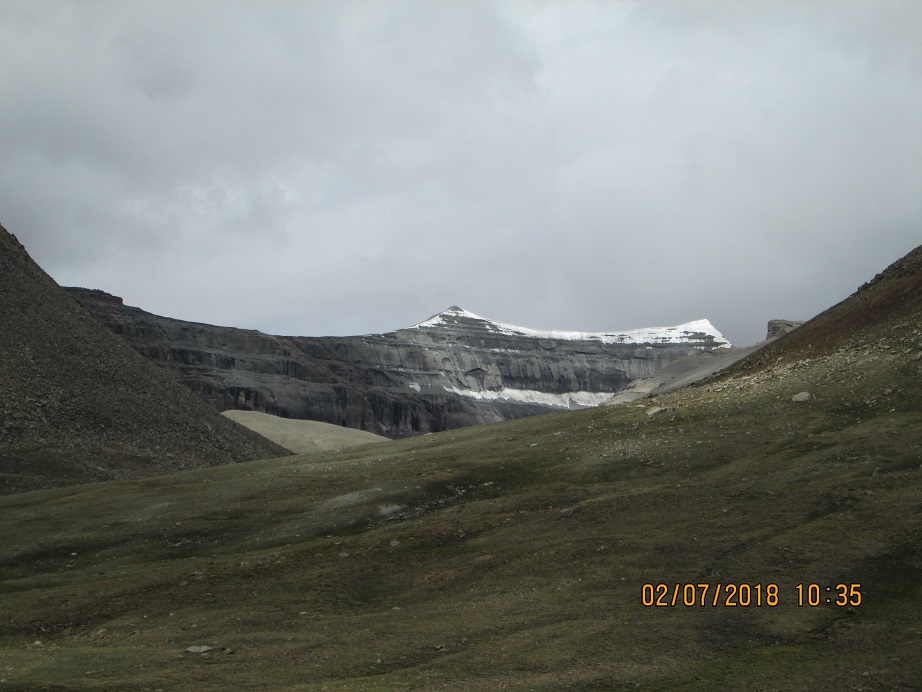 The ascend till Dolma La is pretty stiff dirt road. The condition of the road worsened by the passage of ponies. 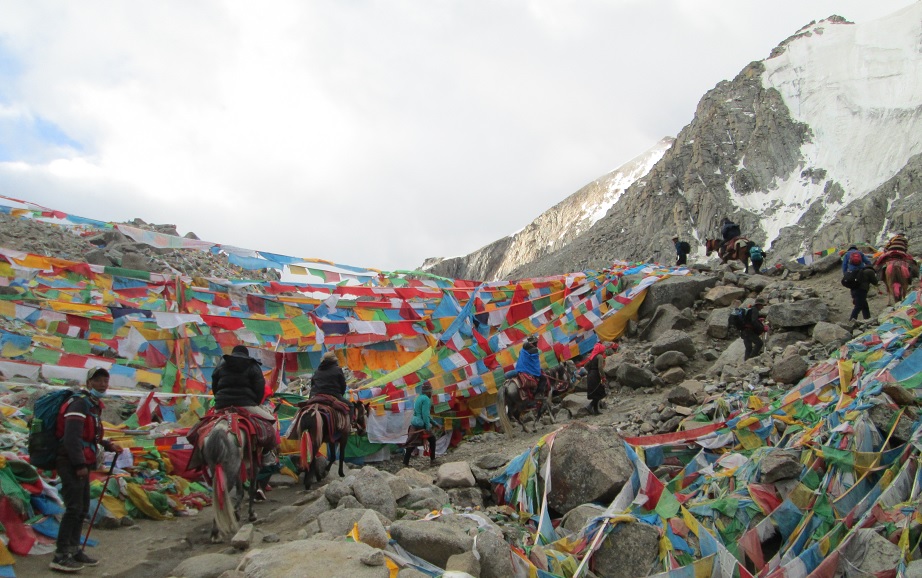 The pony only takes till the opening of the pass. The descend , being steep, is dangerous to climb down on pony back. In fact, the pony handlers release their horses at this point, so that the horses could run free while descending.

The descend therefore, has to be walked by the individual. This is also through a slender steep path, again made treacherous by the passage of ponies on free run.

Post around an hour and a half long ascend, suddenly things fell silent. I was ushered down of the pony and asked to walk. All I could hear then was silence and the flutter of prayer flags. 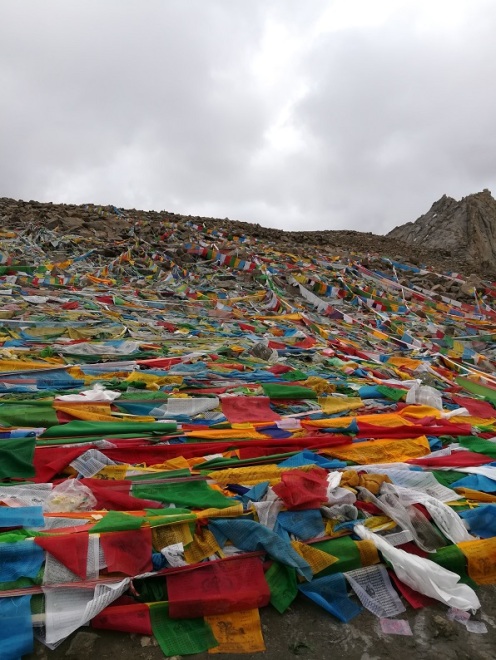 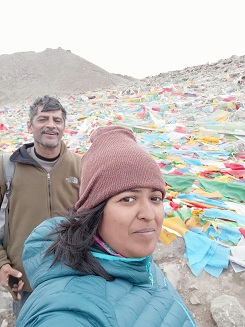 Balu Sir and 😛 atop Dolma La

When I walked some more, I saw the flags, thousands of them, tied in every direction and things discarded by people, cloths, photographs and perhaps memories.

One of the significance of the parikrama or kora has to do with the concept of spiritual death and rebirth. So, it is a practice to leave something here… cloths, shoes, jewellery, anything of that sort.

I stayed looking at the spot for a while, until I was asked by my porter to move. And I did, I don’t know from what I moved forward, or what I left up there.

As I started my journey of climbing down from the Dolma La, in some time, I saw the lake of the Goddess, Gauri Kund.

The emerald green water of this lake is said to have magical powers. I don’t believe in miracles. But the lake looked like a jewel held between the mountains, a speck of colours between the grey mountains surrounding it.

We continued our journey downwards, walking across frozen ice, muddy paths in a land surrounded by beautifully textured mountains. 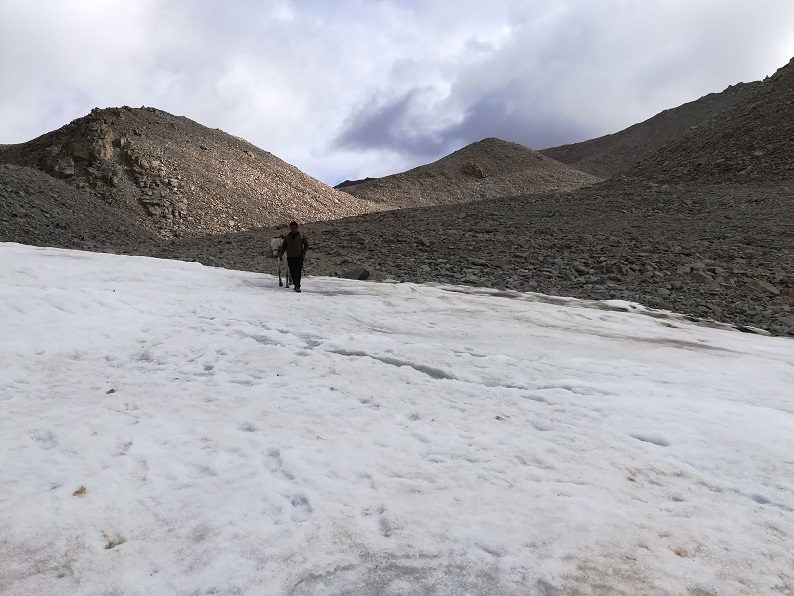 While navigating one such descend through mud, I slipped and fell down spraining my ankle.

I thought it was the end. That I would not be able to walk and maybe I had actually fractured my leg.So I sat down by the side of the road. My porter helped me. The pony handler now free, having released the pony to go down, was there too.

This stop resulted in me observing the people gathered around me. There was Soma, my dearest buddy-cum-big-sister found during the trek. The other two concerned faces were that of the porter and pony handler. It was funny, because by that time, the initial shot of pain had subsided and I understood it was not a crack or fracture, thanks to my boots.

I assured them that nothing had happened and shared some dry fruits and a drink of juice and water. The porter and pony handlers seemed relieved and they started saying “Om Namah Shivaya” And it was my turn to reciprocate and laugh out a second time, this time surprised  🙂

Post this, some more steep climb down was negotiated relatively cautiously. I also noticed my porter carefully choosing relatively easier paths so as not to stress the injured leg much. After another hours trek, I came down from the Dolma La. I now looked at the path traversed again, again surprised at what seemed to be a challenge met. Joy! 🙂

Another make shift tent was there at the bottom of the descend. I took some time to check on the leg here. It was swelling, but the pain was relatively less. From here, it was a walk on almost flat surface for two hours. But I decided to ride the pony as I did not want to put anymore stress on my leg. I was thankful that this incident did not happen on the first day.

So, post having the cup noodles given to us at the tent, I rode the pony to the days stop of Zutulphuk. It was overcast and soon it started drizzling. On the way the valley looked like a flat surface with a stream of silver going through it. 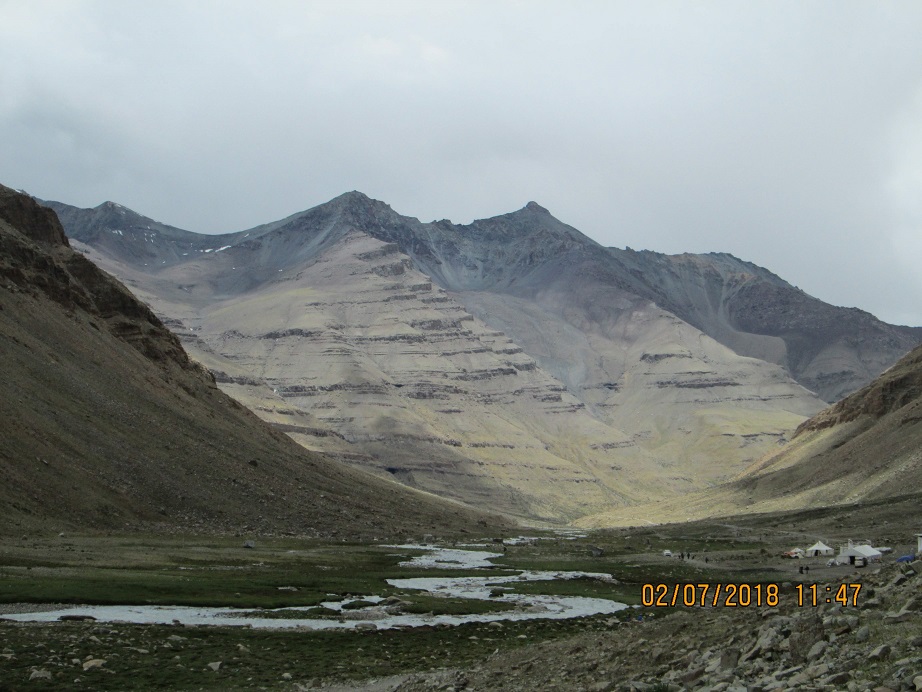 There were piles of mani stones, painted with Om Mani Pemme hum by the road side.

At places, there were Tibetan pilgrims doing parikrama by prostrating.

We reached our camp at around 3 PM. There was a sense of relief among our group. Because we had already completed the toughest part of the trek. This place derives its name from a monastery near it, called ZutulPhuk (translated as cave of miracles).  I saw the monastery up a hill requiring some climbing, but my injured foot prevented me from going that way.

The next days journey was of only around 2 hours to the place where we would be picked up by the buses to go to Qugu by the lake Manas.